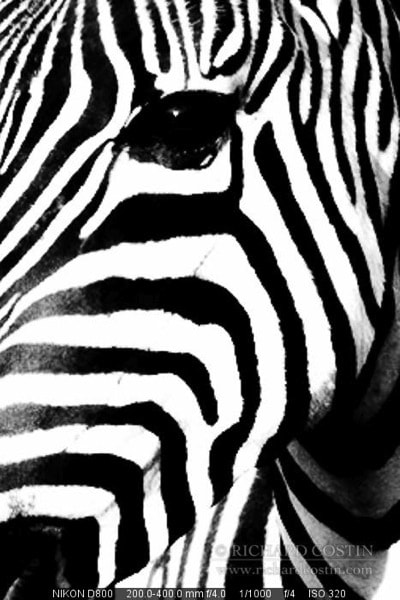 Hi guys, service has resumed after a busy few weeks back from the Mara! I am working on some quick turn around projects up in town as well as planning 2014 and recently lead a great group alongside Stuart White out in Norfolk!

This entry is the penultimate for Africa Live 2013 and we had some cracking first and last light with some great action in the evening.

Before we get cracking I can now let you know our February Safari has now completely sold out so if you are interested in coming on our SEPTEMBER 2014 – WILDLIFE PHOTOGRAPHY SAFARI WORKSHOP please do let us know sooner rather than later!

On with the show..

We started off in the conservancy with a view to heading to the Marsh pride and were on our continuing Zebra mission for Martin. The Zebras we found, the light was good! All we now needed was for one of them to look at us! There are a few certainties in the Mara and one of them is that a Zebra will only look at you once, so be ready!! 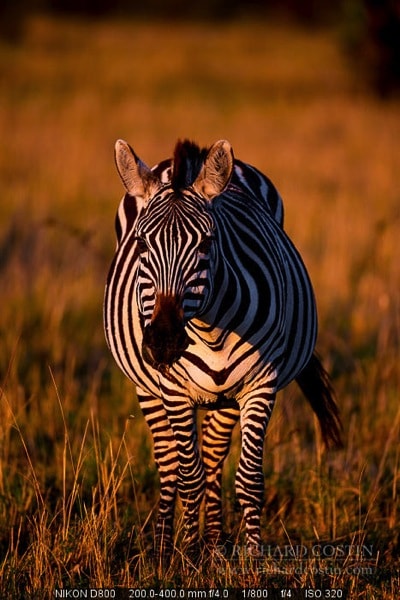 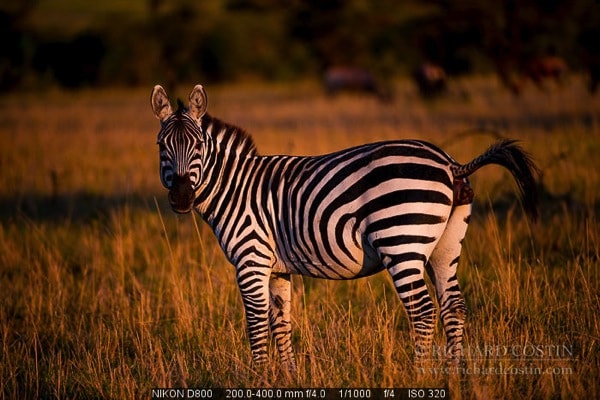 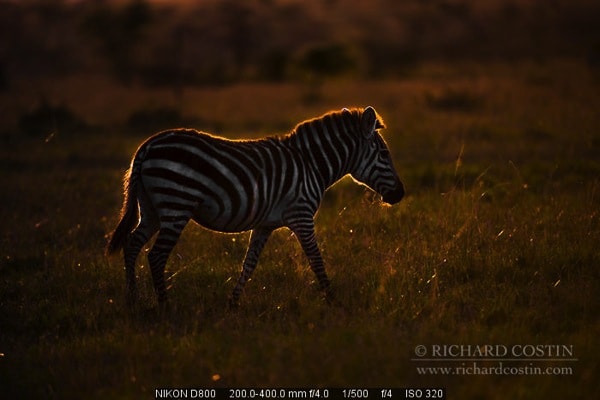 A slight under-exposure always brings out the light well in ring of fire situations. 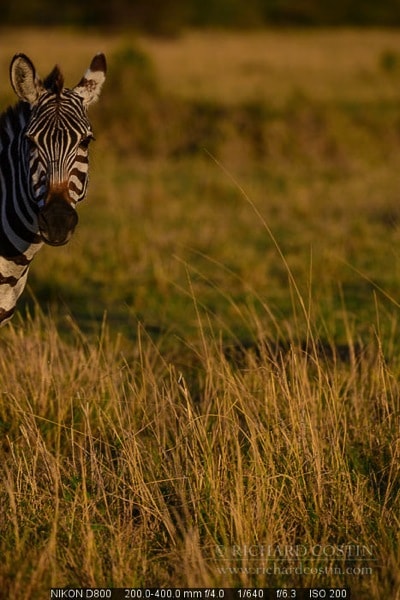 Zebra numbers hit 500,000 for the migration and their striking patterns, as unique as a fingerprint are fantastic. We continued on with them until the hard light of the day made things more difficult with their white toning. 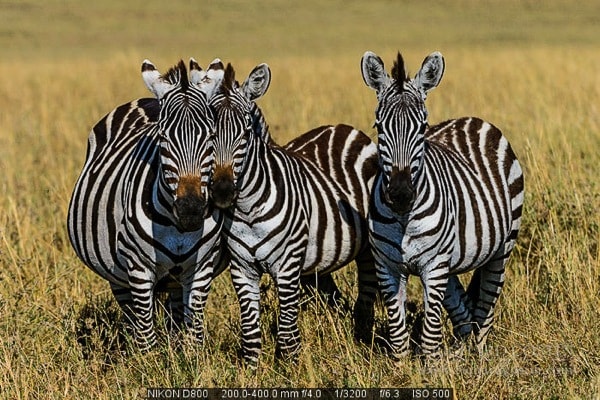 We very quickly found our Marsh pride but they were well and truly settled into the long grass, knowing the animals lets you assess whether you should wait or move on and this was definitely a time to move on. They were out for the count!

We set up in the shade for our Breakfast with a view to keeping an eye on a line of Wildebeest in the distance slowly heading to the river! The erratic rains have put the Wildebeest in a strange mood this year and the crossings were very few and far between. A quick chat to fellow photographer David Lloyd on arrival at the airstrip few days before confirmed they were difficult to see this year, but still happening!

They started, stopped, started, stopped. All the while Patrick and myself were assessing whether to make a move for the river to get a good viewing spot. It is sometimes a tough call as the wait can be hours and yield nothing, or can yield everything so being smart and playing the odds is what’s called for. We packed up, and made our way down to the river.

The movement of the wildebeest and Zebra suggested they wanted to push on so chances were the highest of the trip so far they would. There were no storms in the wrong direction to distract them this time!

Patrick is a superb driver and managed after several reshuffles (based on the Wildebeest’s movements) to get us a prime spot. Not always an easy task as these crossing points can become very busy. We had our spot but space was a bit tight so I kept my head down (not out of the roof) or Chris, Martin and Cath to get their shots and I grabbed what I could from the passenger window. The crocs were BIG this year! 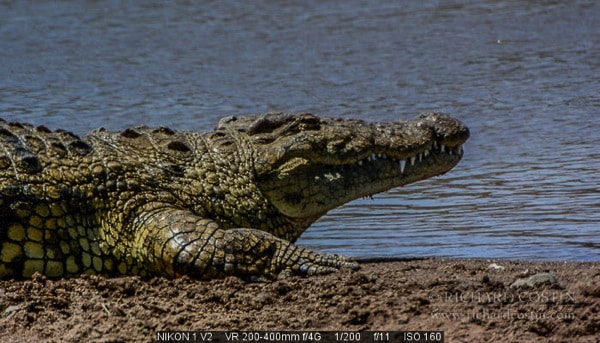 After finally getting our crossing it was a great feeling and we headed on out! 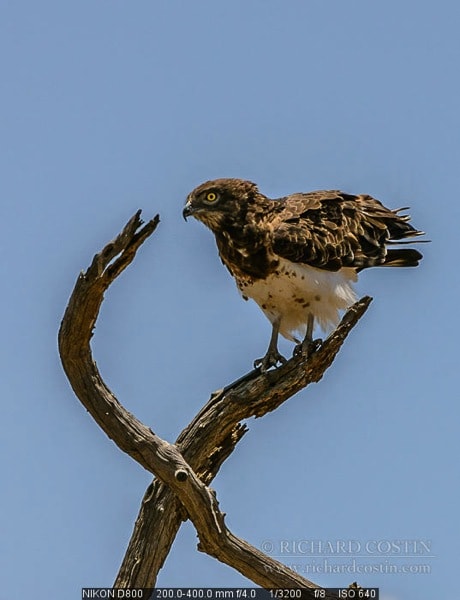 After lunch back at camp we headed out to find our Cheetahs in the conservancy. We quickly found them and could see they were hungry and looking.

We followed them and when we saw they had a meal in their sights we, as usual, backed well away and around the action to let them do their thing. Cheetahs don’t come by their meals easily and I can’t imagine what I would feel like if we ruined a hunt for them so we are always SUPER careful to just observe; even if it means putting distance between us and them. 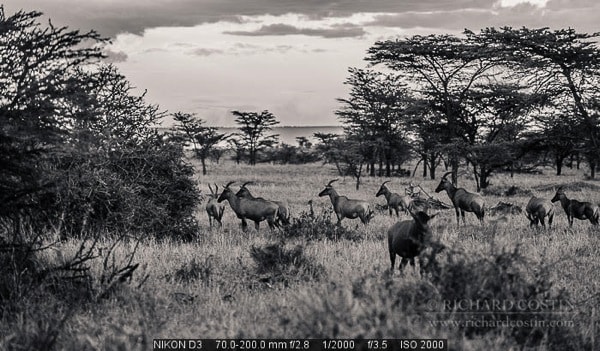 The local neighborhood watch new something was up, just before the chase. Topi have amazing eye sight and are top lookouts. 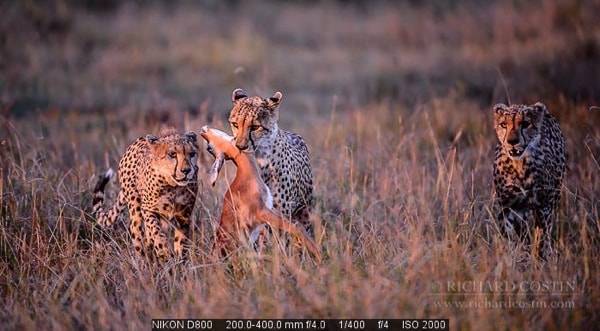 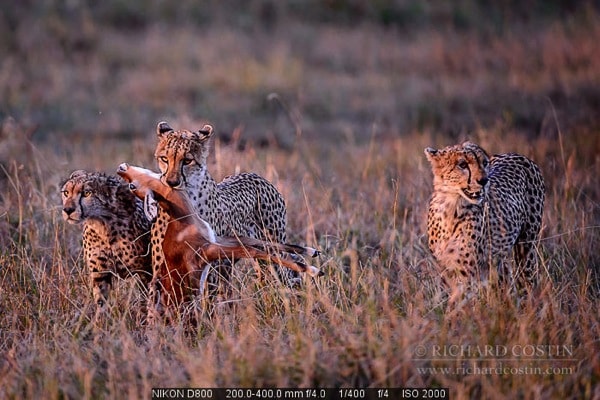 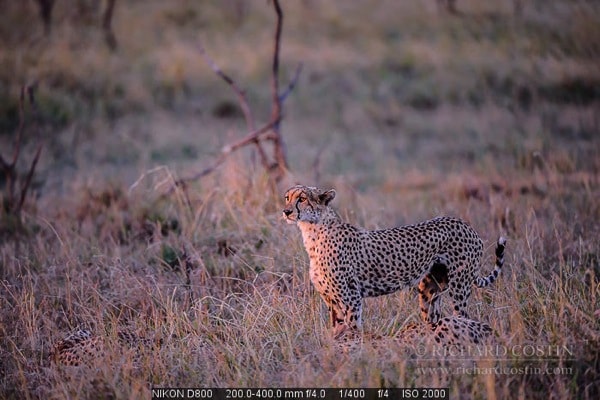 As you can see, after a kill the mum is all eyes. Most of the other predators can and will take the kill from her if the see it so they have to eat quickly, preferably moving the prey to a seclude spot strait away (after catching her breath!) 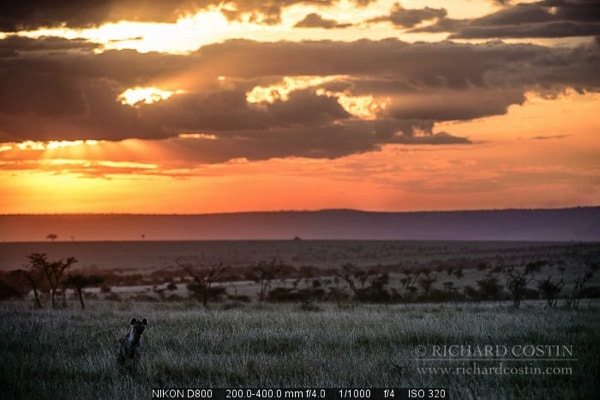 And here you can see why. The noise from the kill perked up the ears of this Hyena. Although they are most know for their scavenging they are actually also very good hunters themselves.

It wasn’t long before he found them. They had had 10 minutes of eating which is not that long, but at least it was a feed. 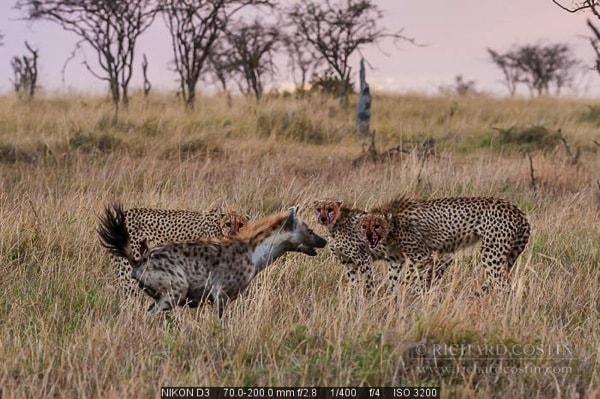 They put up a brief defense, but knowing other Hyena wouldn’t be too far behind and their relative small build they protected their ability to hunt another day and made an exit 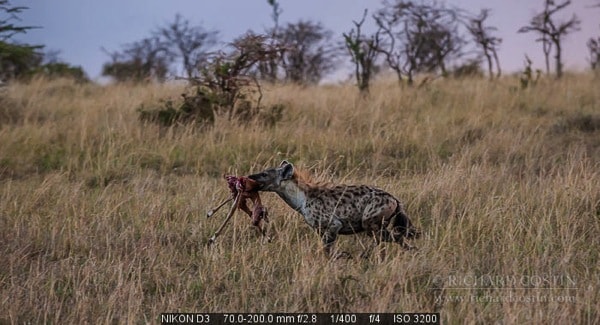 One happy Hyena. Hopefully the Cheetahs will get another feed soon, they have a very hard life. 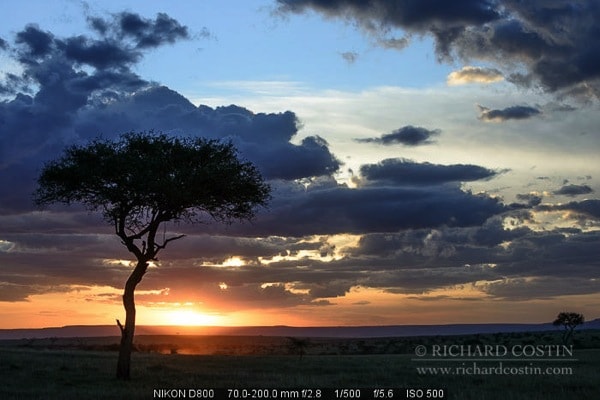 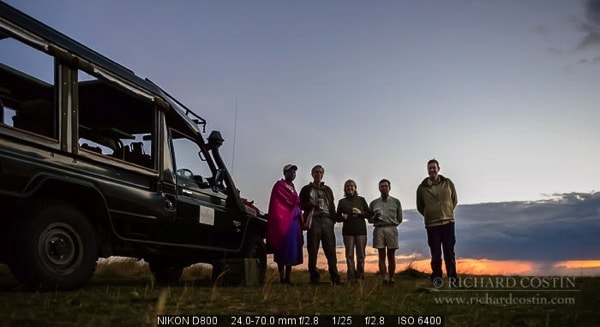 A well earned sun downer with the group!

And with that it was back to camp for a hot shower, cold drink and dinner! Thanks again all, tune it tomorrow and see how we got on with our last morning!

Thanks as always!! Richard.

If you have been enjoying these posts, please feel free to drop me a line on Facebook as I love getting your messages and it spurs me on, questions on any aspect of the trip welcome too!

As mentioned, our February Big Cats trip this coming Feb has now completely sold out! We do have spaces on our September 2014 Safari if you fancy seeing it all for yourself and improving your own photography!