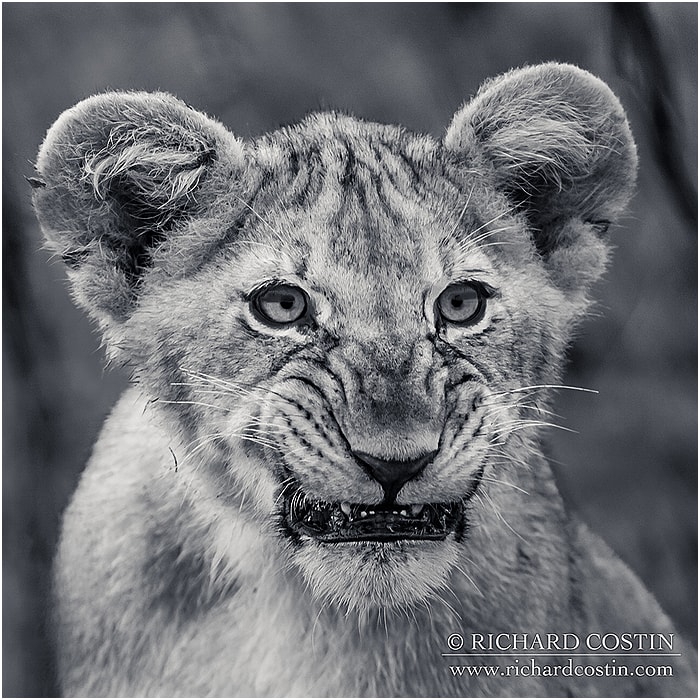 Hi all. We are picking up strait after our kill sequence from last time.

After watching our Lion’s eat for a while we carefully made our way out from the rocky area and off for pastures new.

Not far from where we were with the Lions we had a brief opportunity to watch these sparring Topi. It wasn’t a full on confrontation but was certainly more than casual fighting. 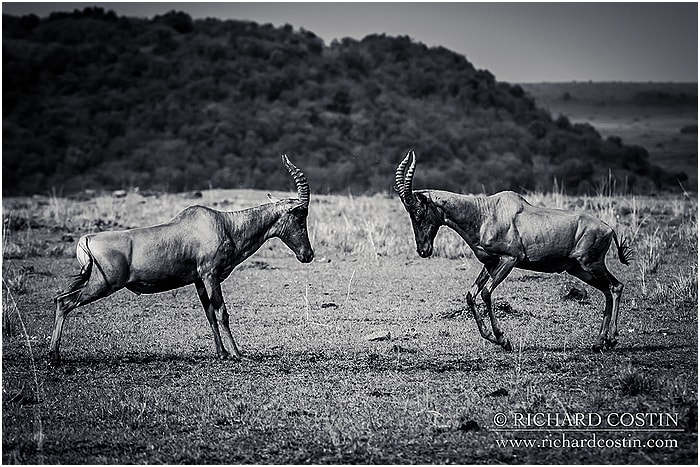 Equally matched and neither giving way.

Once they decided it wasn’t worth the effort and retreated back away from each other we made our way over to the nicknamed “Chinese” crossing along the Mara river as we had had a report of a small herd massing on the far side, looking like they wanted to cross. As we arrived, some 30 minutes or so later, we came across the herd slowly making their way down to the river. 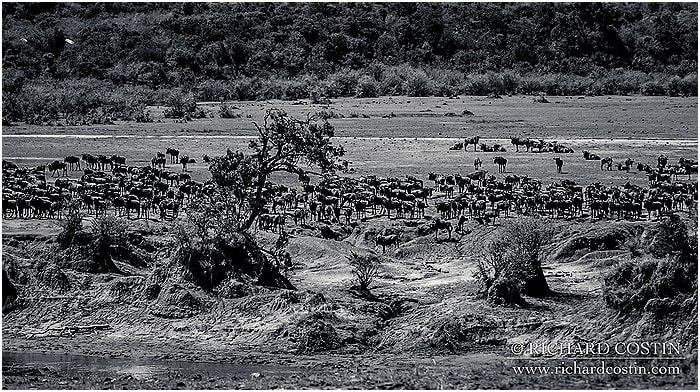 A thin line, but the numbers behind were promising and initially heading in the right direction towards the river.

The heat was quite intense and we managed to secure a good spot with easy access down to the river should they decide to go for it. It is very important to hang back and let them go at their own pace before they charge full on into a crossing. Moving in too close and to early is a very bad idea as it can disrupt them. Delaying their migration activities can mean real trouble if the rains have been scarce and bad form in any circumstance. 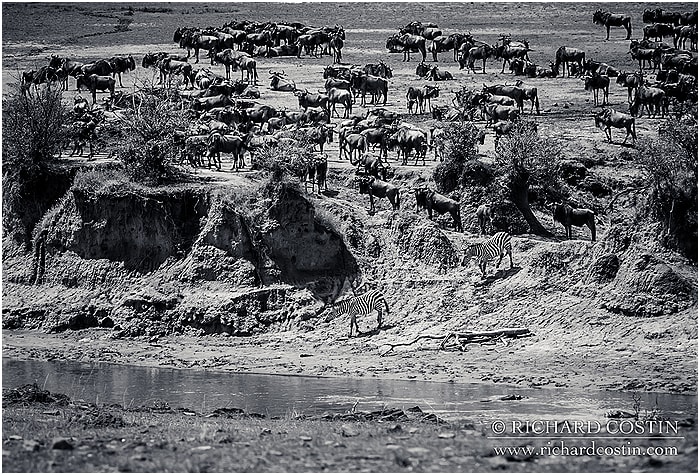 The smarter Zebra often lead the way down.

We waited and waited. The migration sometimes blesses you with a reward for patience and on other occasions reminds you all too clearly that they are in control. The group moved closer in and looked tempted, waiting for our leading Zebra to go but the fear was simply getting the better of everyone this time (can you blame them with the dangers that can lurk in the rivers?) We called it there and made our way off, slowly starting to make our way back to camp via a few hopefully spots we had in mind.

En route we found a good vantage point to make some quick (super quick, hand-held) panorama of the plains. Below you can see the full strip of the image and afterwards an interactive version you can pan…

Click and drag or scroll your mouse wheel to pan across…

Not the largest herds I have ever seen on these plains but good to see the numbers up somewhat given the tricky weather conditions. Weather is always the big unknown for the wildlife (and us trying to observe them!) and you simply have to roll with the punches. The Wildebeest are confused at the moment and their usually dedicated path is scattered hugely by the erratic rains. 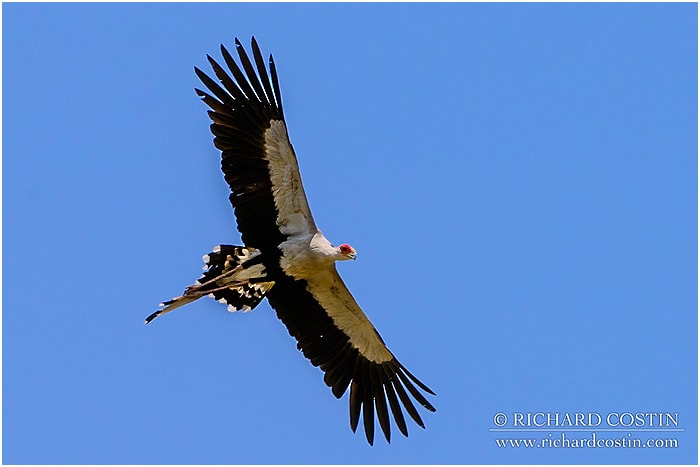 Usually seen walking through the long grass, it was great to see a Secretary bird in flight.

In the very early hours this morning we had heard the local Lions calling to each other (at camp we often do as this pride is very large and vocal) and Patrick can get a pretty good reading on roughly where they will be during the day from this.

We made our way in that direction and sure enough, they were there and luckily the cubs were in a playful mood! 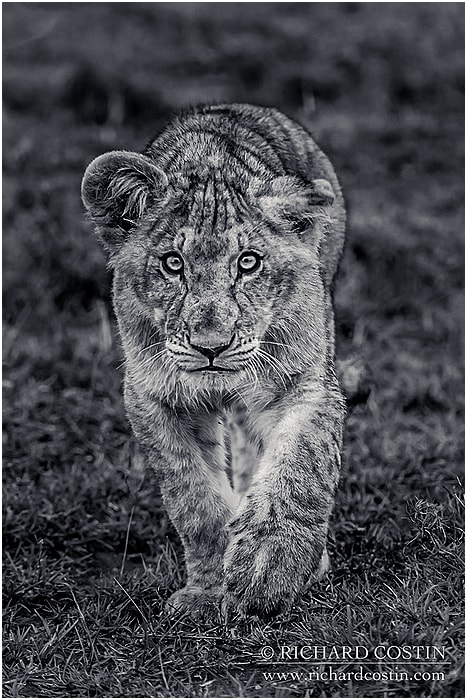 This little guy is getting a reputation for being a little too curious. He stole a bean bag a few weeks back so we need to slightly rev the engine as he approaches to prevent him becoming too comfortable with us human folk as he grows up. 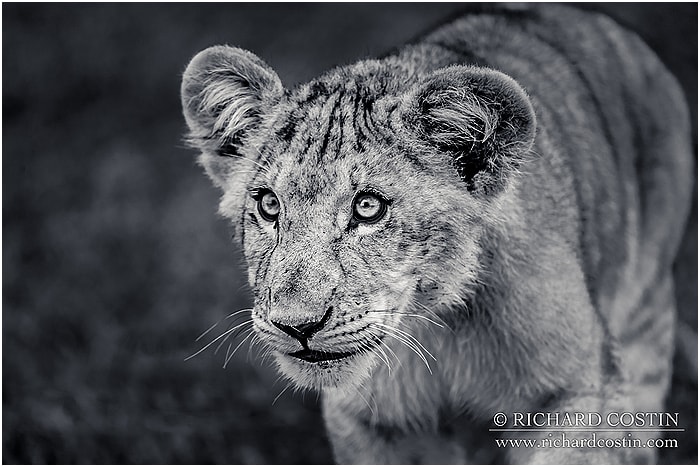 Defiantly a trouble maker! Here he is looking Gill and Katy square in the eye as they photograph. 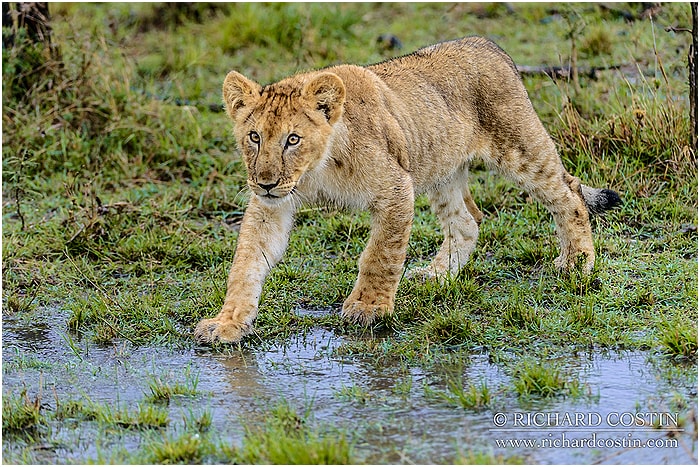 Our trouble maker finally got the hint and returned to his siblings so as not to miss out on playtime.

Lion cubs are bags of fun to watch as they play and the recent rain and cooler temperature on serves to increase their energy levels. 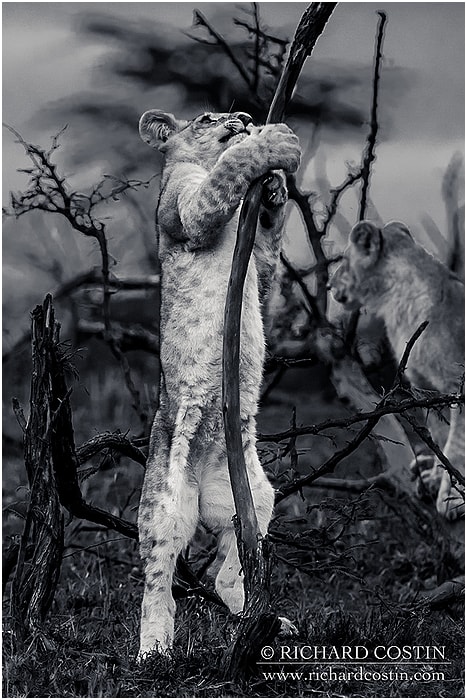 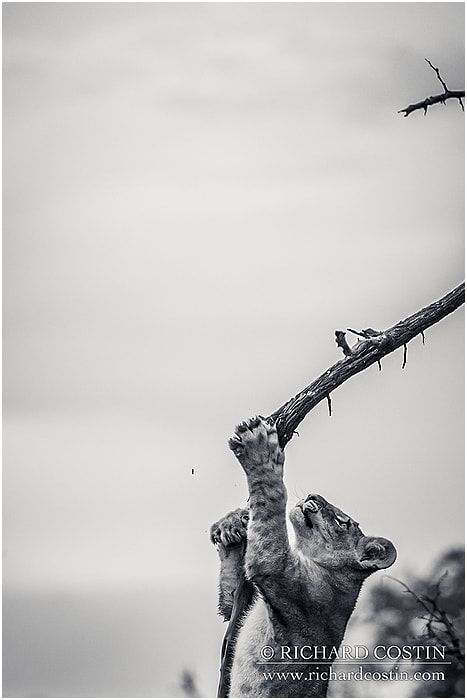 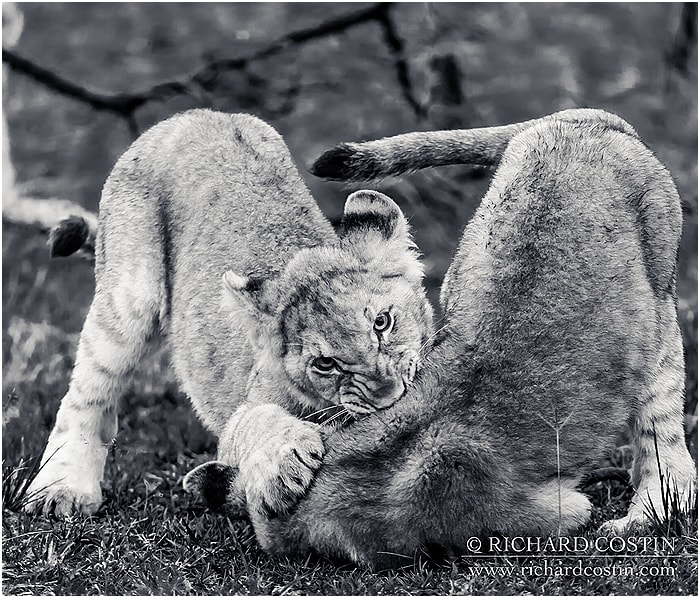 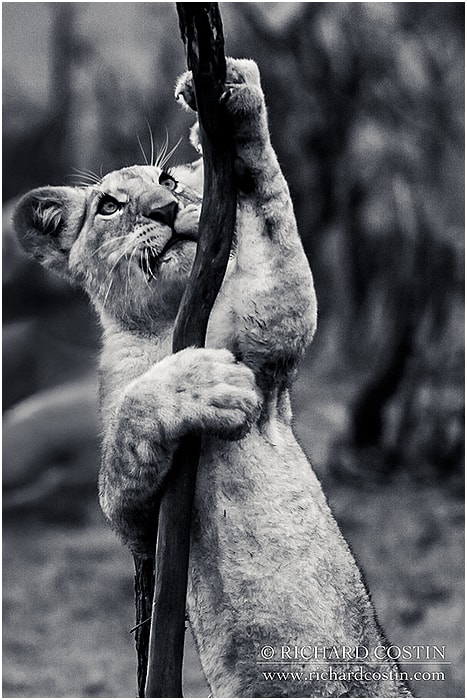 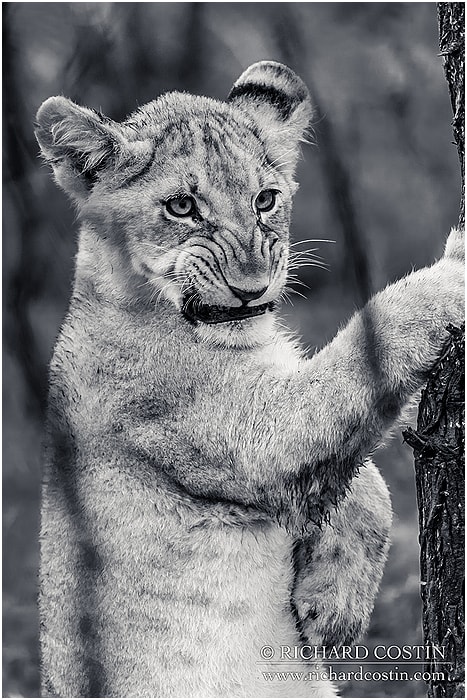 Not a happy bunny. Another car that had seen us and followed in to get a look at our find were clattering a little too much with their gear and talking a little too loudly. Usually the lions slowly move away if people start acting like that (I won’t tolerate it in our cars). However our little trouble maker here seemed very concerned as you can see.

Definitely not happy. I was just about to ask Patrick to head over to the other car so we could have a word but he was well ahead of me. A quick word later and they reduced their chattering to a whisper thankfully. 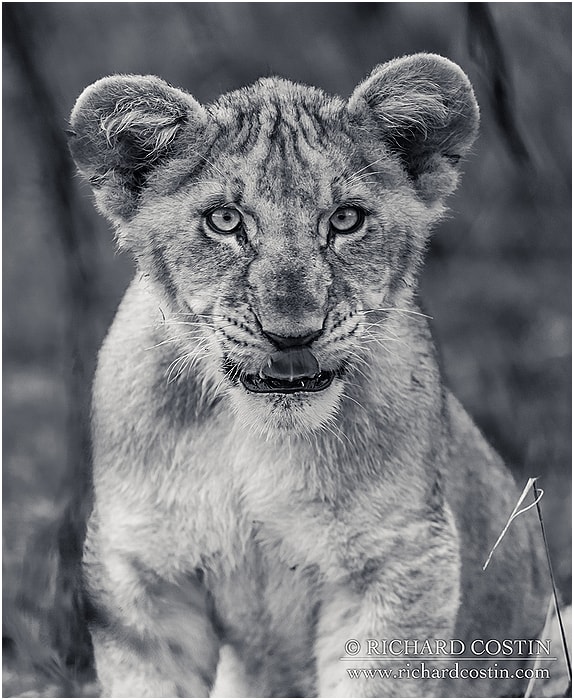 Back to normal a moment later. I alway prefer photographing relaxed (or at least, natural) behaviour from wildlife. If I ever get the sense I or someone else is effecting them I will do my best to put it right. Sometimes that means leaving the animal alone altogether, but this time he settled very quickly. He just didn’t like the sound of chatter too close. 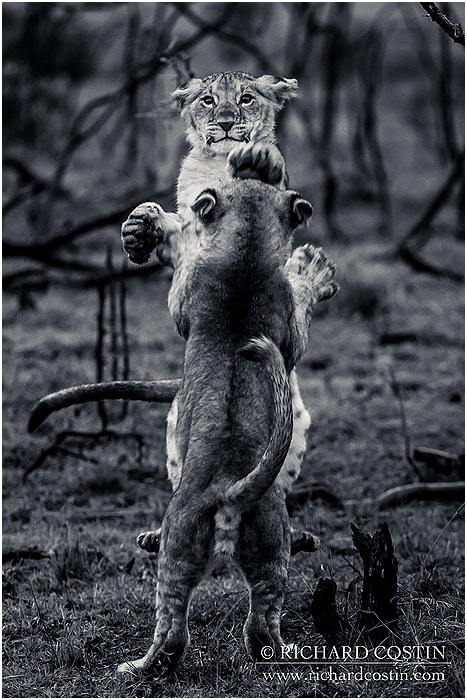 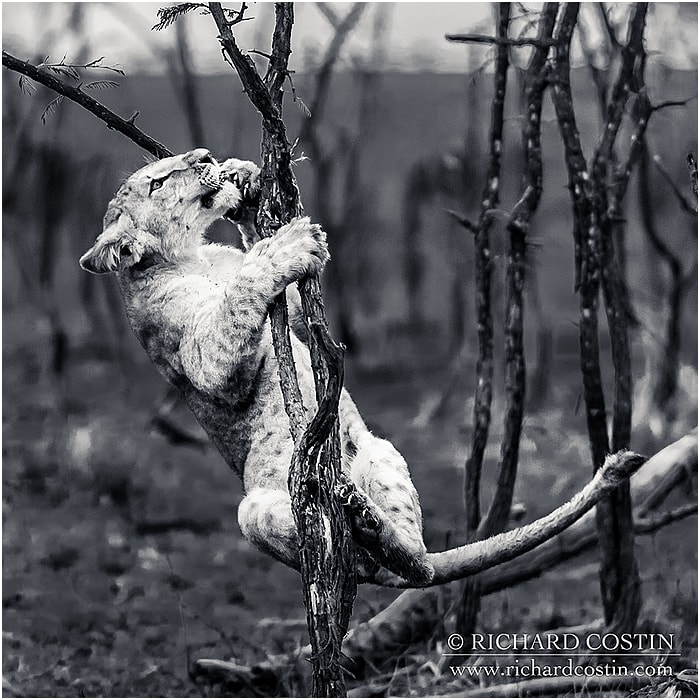 The light was fading as we were in a very low down position. The light in the sky was starting to get rather colourful and we decided to quickly head to higher ground for some sunset shots. Check back in a day or two to see how we got on.

I hope you all voted! Given the results I know that the thousands of you that fight the cause for British wildlife will keep the pressure on our government to make the right choices despite their repeated bad decisions.