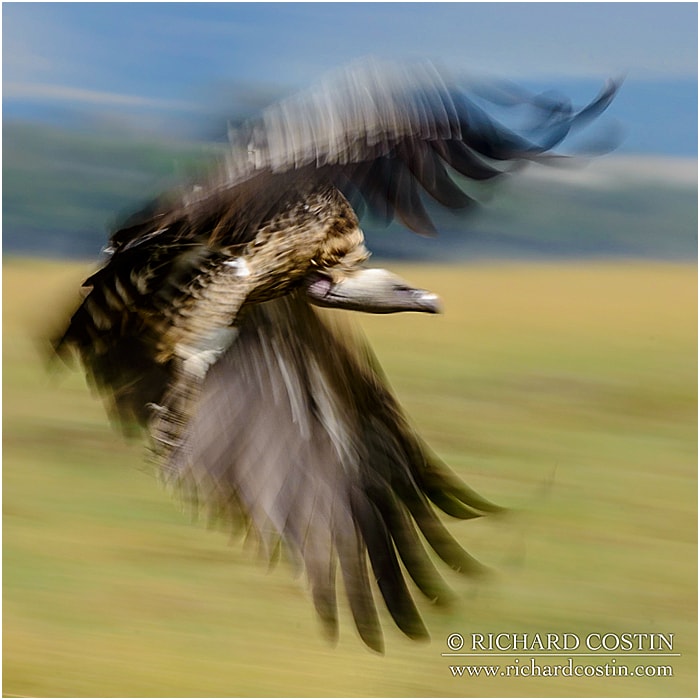 Greetings one and all. A new day and a new post for you. Some wonderful light this morning so without further delay, here we go!

We of course set out early. The first thing I do as we leave the shelter of the camp is to check over my shoulder to the East and see what the clouds are doing in the direction of the sunrise. It looked like we were in for some good light, so suggested to Patrick we head for something closer by to improve our chances of catching the first early rays.

Patrick being Patrick of course didn’t let us down and we had this chap to ourselves and wonderfully, in the open! 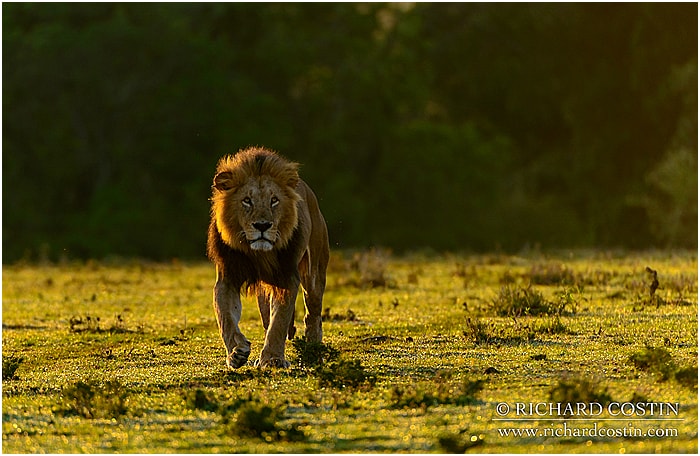 Out in the open and on the move at sunrise. Great!

We tracked with him for a good few minutes as he was making his way to his buddy across the plains. He was a little more skittish than most of the pride, so we kept a greater distance between us than usual so as not to cause any stress. 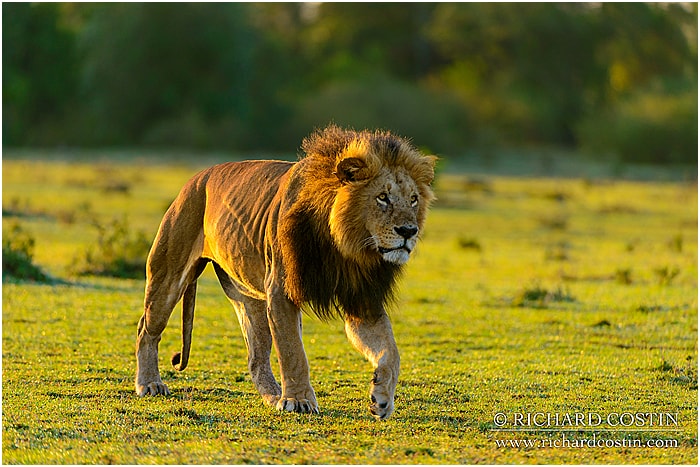 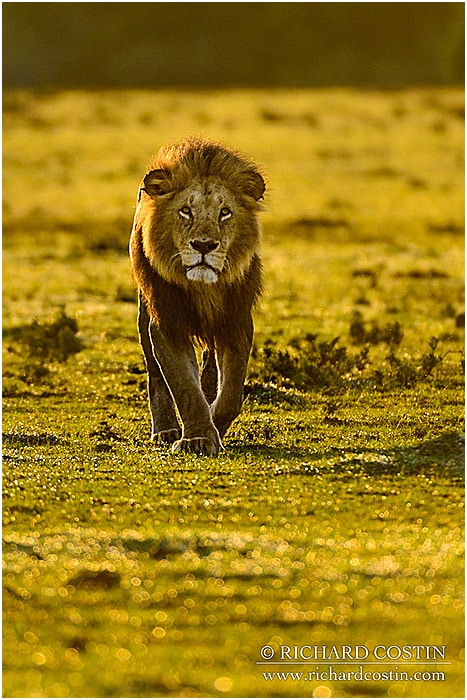 Keeping out distance helped relax this chap and he was soon comfortable enough to move towards us with no worry. 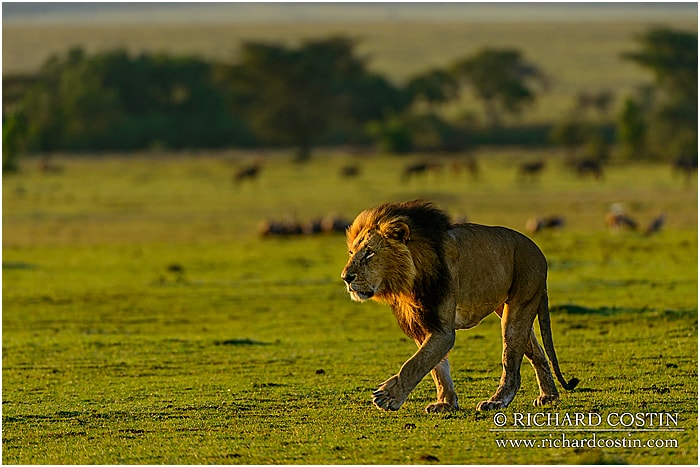 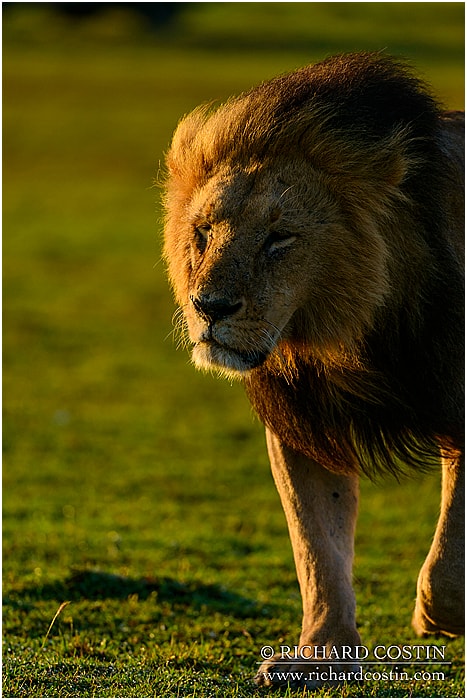 Absolutely wonderful side lighting, really firing up the fur as well as the freshly grazed grass in the area. 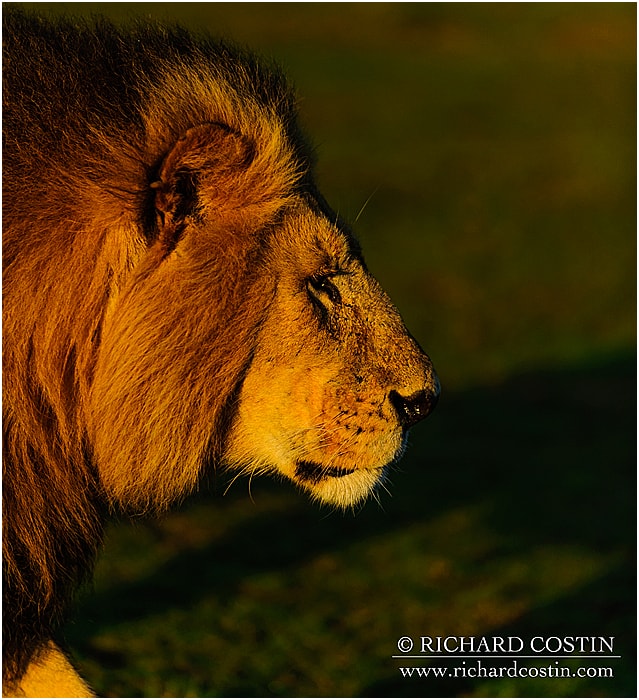 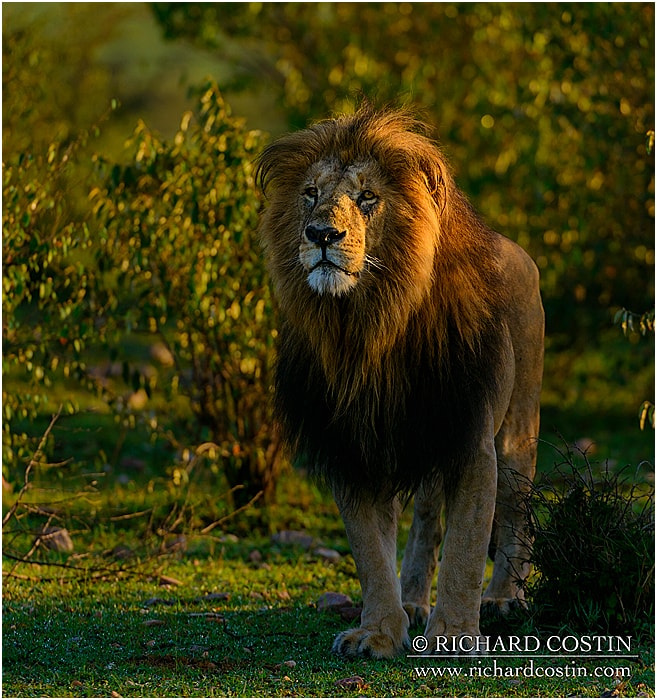 A brief break to mark territory and then onwards.

We then left him as he made his way into the undergrowth.

Charles was on the radio as he had located a nearby (ish) Leopard so we put our foot down and held on tight.

We arrived, but on this occasion we only managed to nab this quick snap before he vanished into the bushes as only Leopards can. 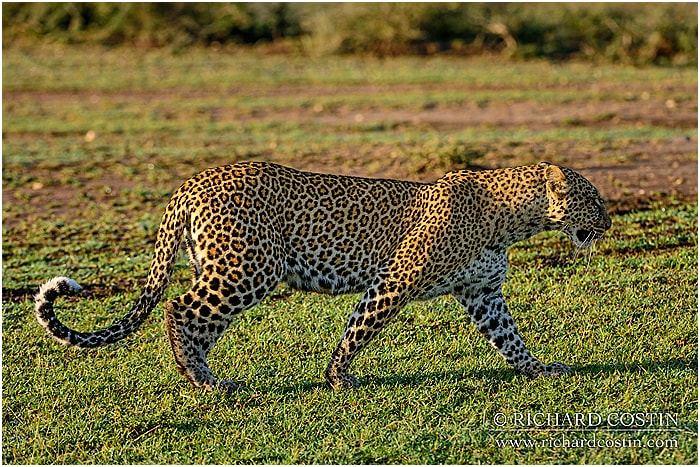 You can’t win them all and it’s always a privilege to glimpse a wild Leopard, brief or otherwise.

As the light became harsher I wanted to help the group practise some slow shutter techniques some more. To that end Patrick took us off in the direction of a small Wildebeest herd in the distance.

We parked up just ahead of their direction of travel and I began helping out with shutter options and the all important panning technique. Practice is the key here and we had parked up in the perfect spot to give it a go… 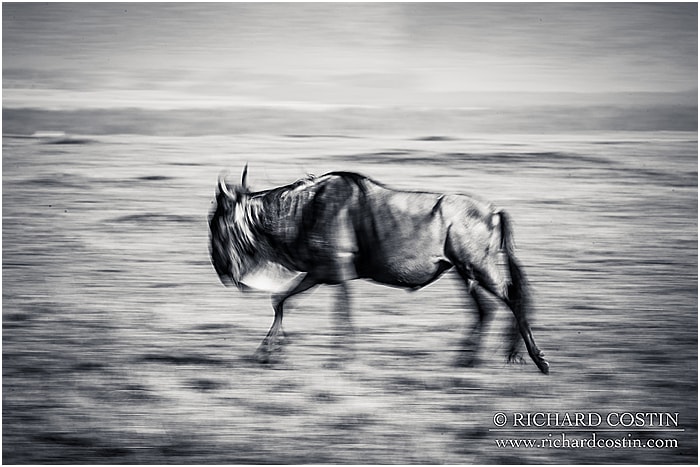 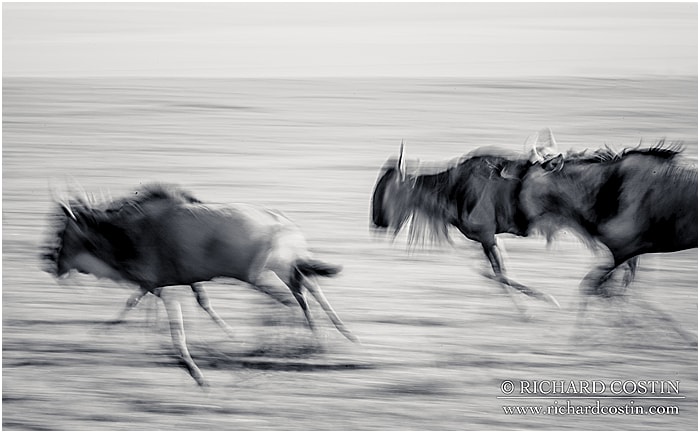 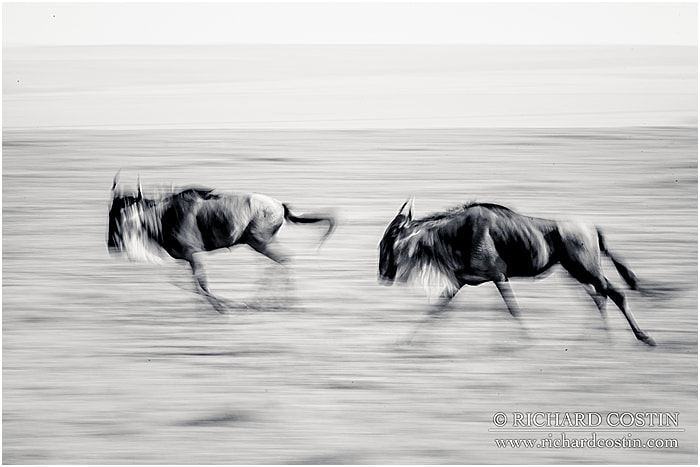 Many shots later we moved on. Patrick believed this Lion kill was the source of the calling we heard in the night.

Clearly a good feed had been had and this lady was picking up the last scraps. 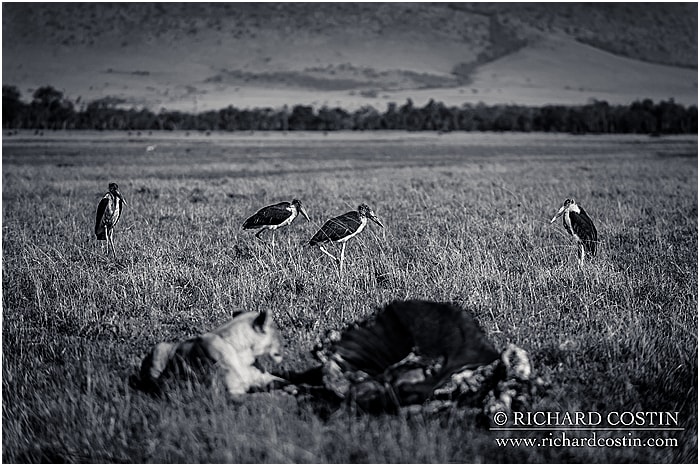 Clearly not the only one interested in the meal. 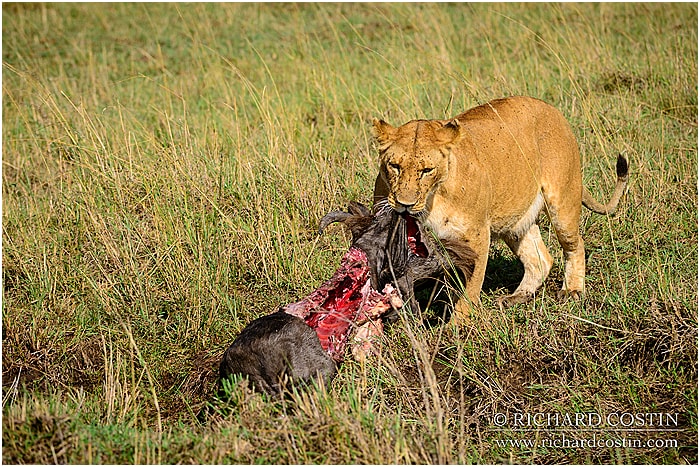 Uncomfortable with the massing birds, she attempted to move the carcass to a more shielded area. 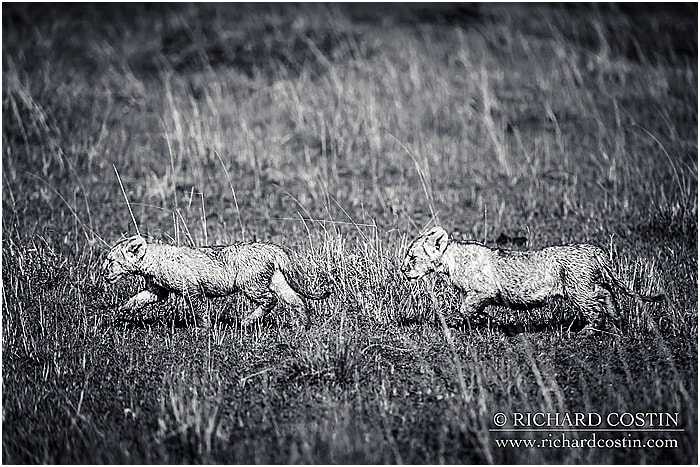 Across the small gully, the rest of the pride were slowly moving off. 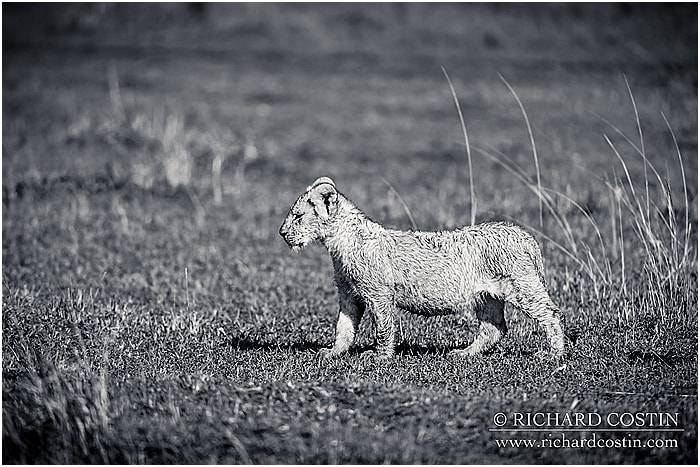 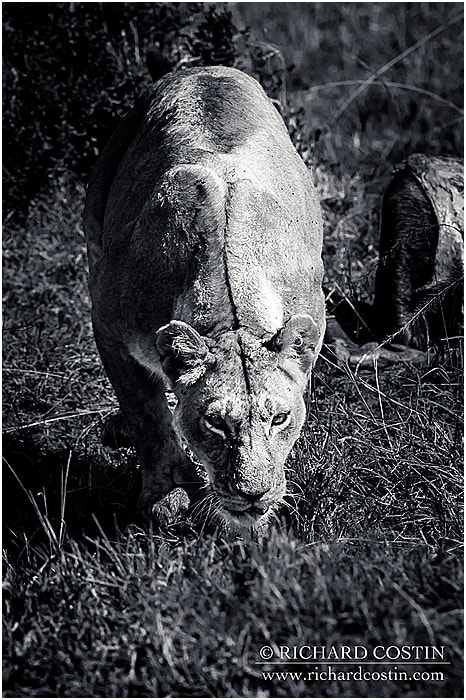 Not wanting to be left behind she got up. I noted to the group we were about to get a jump (most likely) and to be ready with eyes through the cameras and fingers at the ready. 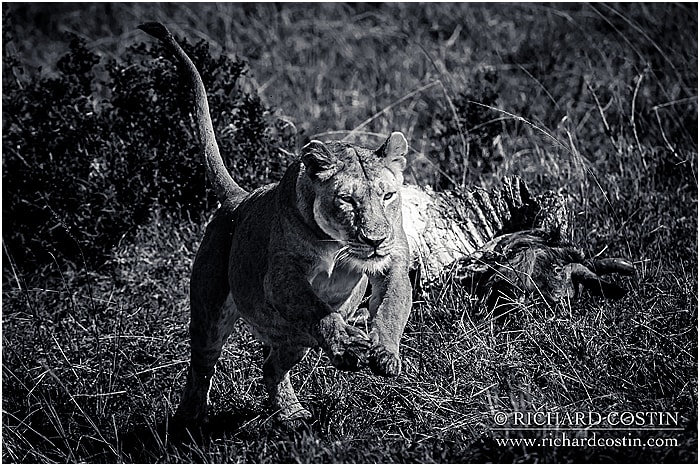 Not the most powerful jump in the world, but seeing these large predators moving with speed and grace of any level is always a treat. 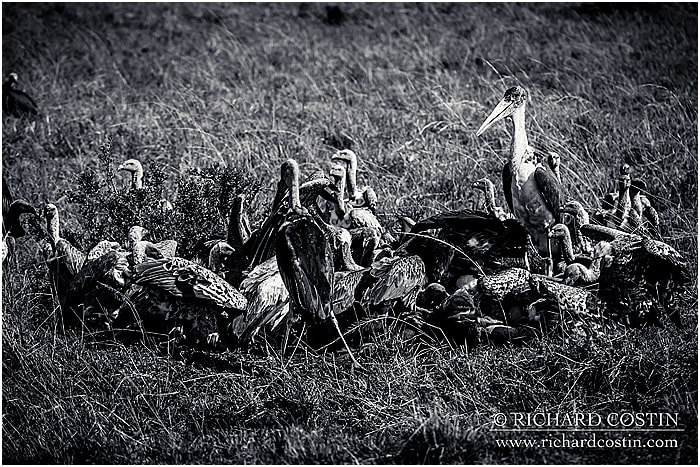 The moment they had waited so patiently for finally came.

As soon as the waiting Storks moved in the circling Vultures took their cue and began to descend en mass. 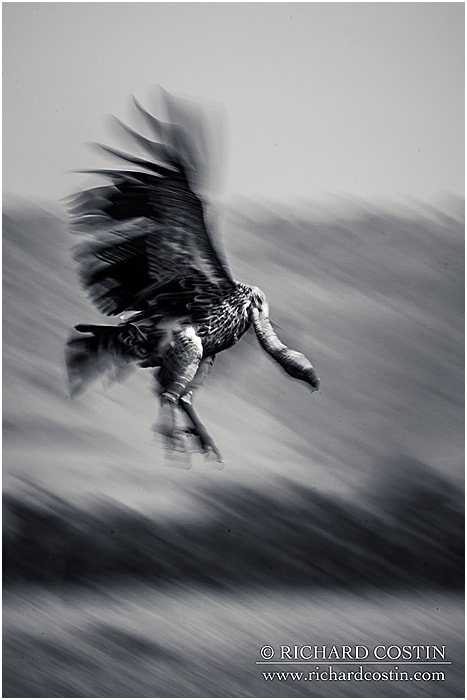 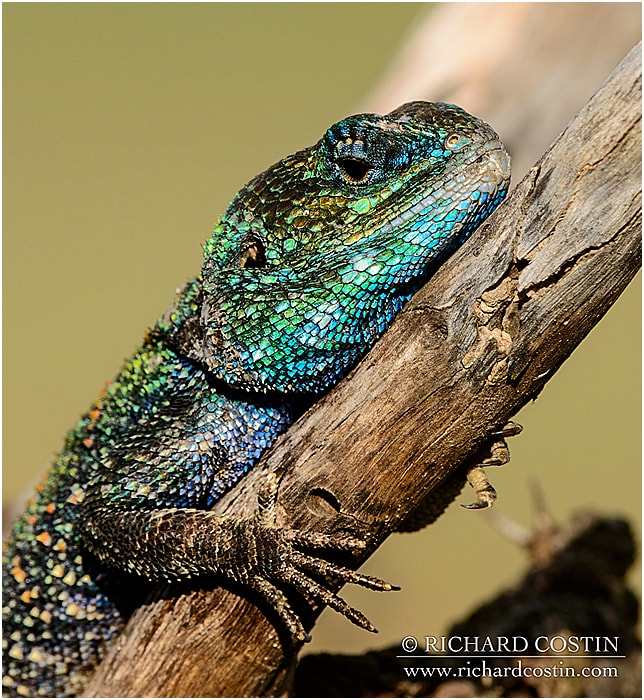 And with the heat rising we decided to make our way back a little earlier for a cool off and rest before lunch. Not a bad morning at all! Patrick noted that we were in for an unpredictable afternoon weather-wise and he certainly was right! Do check back next time and see how we got on.

Thanks for reading folks! Rich.